⌘ This is a Valknut. 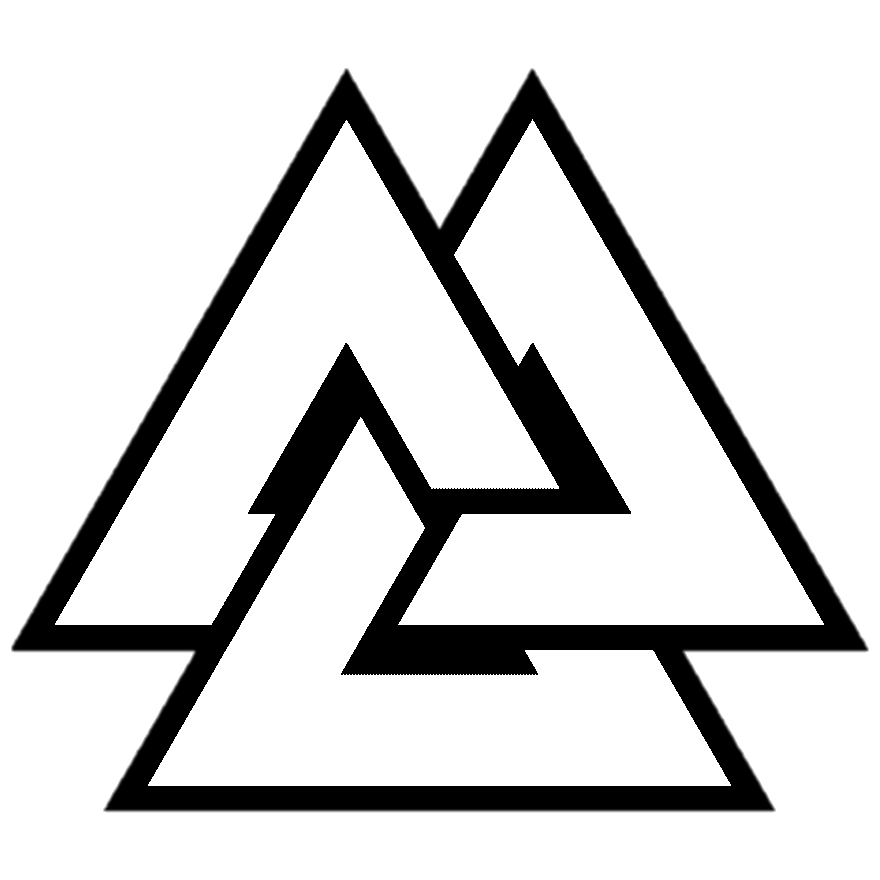 The thing we’ve come to associate fondly with as a “Valknut” is a symbol we do not fully understand the name or the meaning of. What does this mean? It means that as with oh so many other aspects of things we “know” and love, the earliest forces of modern heathenry fed us all a hefty dose of misinformation which we readily gobbled up and internalized to the extent that people were and are out there warning others not to get the “Valknut” symbol tattooed onto their bodies or they may suffer the fate of being chosen by Odin.

[1]
What a load of hogwash. It has zero bearing in fact when we reexamine the evidence we have available.

This symbol, dubbed the “Valknut” modernly, is unnamed on any historical source in which it is pictured and its name passed from folk reckoning. It does not appear in any lore source by that name at all. This seems odd, so why did we start calling it a “valknut” then? Basically, people modernly named it that giving it the air of accuracy and authenticity by it being in Old Norse. I tried, I really tried to figure out who incorrectly applied the term for the symbol and that information was not forthcoming; I’m sure it exists somewhere but I do not know who erroneously applied that term or when. However, there already existed a symbol by that name and it is most certainly not triangular. The looped square (⌘) is known as the valknute in Norway, it is a Valknut. That ⌘ has a history of ancient heathen use as well and if its name is a survival you’d find the etymology would be interesting and everything people want the “Valknut” to be. However, if ⌘ is a Valknut, what should the “Valknut” properly be called? 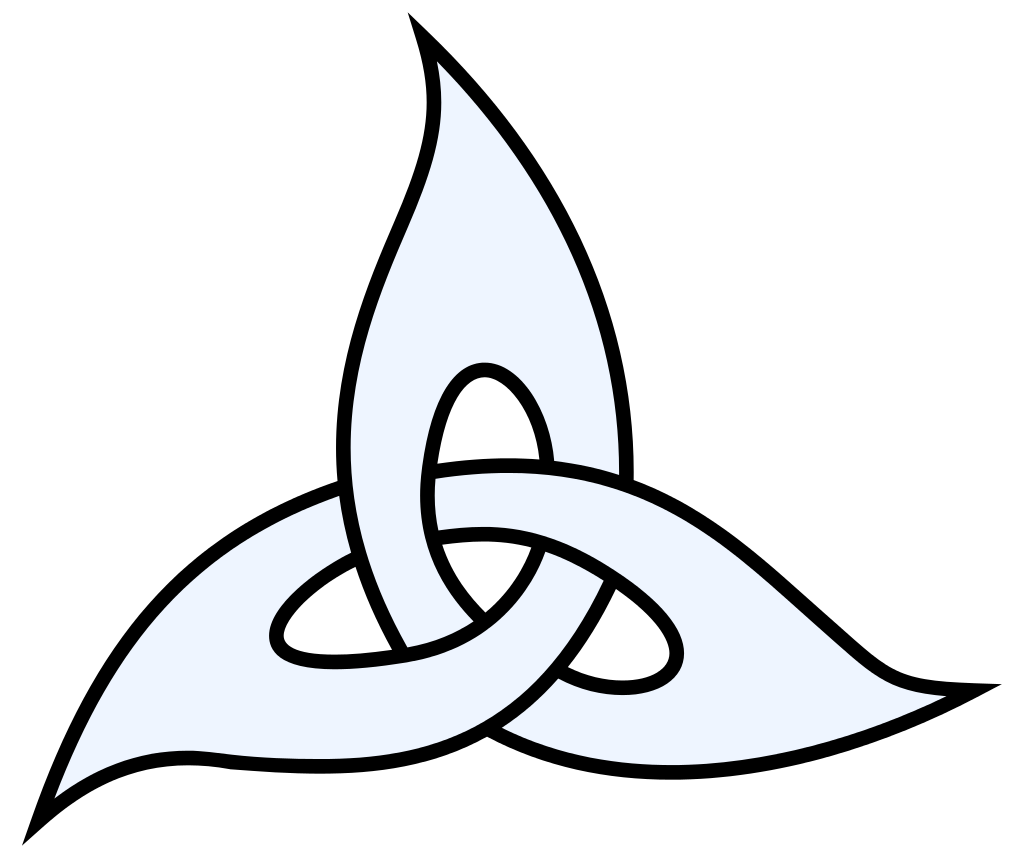 It’s in a family of symbols we refer to as triquetras (as seen above), but that is most certainly not what it would have been called for the ancient heathens. Instead, the most likely name for it would be Hrungnir’s heart. This name is derived from Snorri Sturluson’s Prose Edda the Skáldskaparmál in which he wrote:

Here in the 1916 Brodeur Translation:

“Hrungnir had the heart which is notorious, of hard stone and spiked with three corners, even as the written character is since formed, which men call Hrungnir’s Heart.” (Skáldskaparmál, Prose Edda)[3]

This is our only source for this, and even it is unspecific, because of that it is not a definitive answer as to the name of this symbol. However, no other source exists to even hint at the name of the symbol. The name “Valknut” was applied to the symbol modernly and any connections to that name through etymology or philology would not apply because that is not the proper ancient name. Those etymologies would instead probably apply to the ⌘.

If it’s not a Valknut, is it at least connected to Odin? No, not *definitively*. It appears on various carved stones and none definitively show Odin with the symbol. On Storra’s Stone I there is a hanged(? this one is somewhat dubious) man and a raven(? it could be a raven) and perhaps a human sacrifice(? I don’t know what is going on here but it looks like some dude is being shoved into a photo copier) as well as a man with a spear and the symbol appears above.

Yet in the Tängelgårda stone an eight legged horse sleipnir(? because what other horse has eight legs) is pictured in one area without any of the symbol and elsewhere a man on a four legged horse is pictured with several of them. There was clear opportunity to put the triangular symbol with Sleipnir but it was not done, there was clear knowledge of the symbol because it was pictured elsewhere on the same stone. This to me signifies that it is probably not strictly a symbol of Odin but instead something else entirely. To me, the burden of showing it as a symbol of Odin has not been met. If it isn’t entirely a symbol of Odin and if it isn’t a “Valknut”, well what is it?

Is the “Valknut” a symbol of death? I am not convinced it is a death symbol. This goes back at least to H.R. Ellis Davisdon who associated the “Valknut” to Woden through some cremation urns found in East Anglia.[4] However, Davisdon does not reproduce drawings of the particular urn or urns she was referencing and they have alluded me in my searches for them. I have seen Spong Hill urns with Horses and what looks like wolves on them, but none with the “Valknut”. I have been trying to find pictures of these specific urns. You would think you could search for the urn you wanted to see by symbol, but no. I have seen lots, LOTS of urns with swastikas on them. But here is the problem – even if there are urns covered in “Valknuts”, just because someone stamps it on an urn does not make whatever it is stamped there a symbol of death. So even if these “Valknut” urns do show the “Valknut” we know and not just some other triquetra it does not make it a death symbol. I will keep looking for them all the same though.

The simple answer is that we just do not know what this symbol means. It’s definitely not a “Valknut” though, not a “knot of the slain”, that is what we can know for certain. Too many mental connections have been made to the false etymology though and due to this it will be hard to shake. It is also probably not strictly a symbol of Odin either, but either way it isn’t provable. It could be a death symbol, but could just as easily not be one. It might have been called Hrungnir’s heart at least some of the time; but even that isn’t completely certain despite being our best bet from the lore. What is certain is that you need not fear the symbol. From everything we do know about it, we can say that there is no evidence that it is some kind of Odin beacon drawing his attention. What is far more likely to be an Odin beacon is worrying overly much about Odin beacons.

Furthermore, we as a whole should become more aware of passing on information we cannot trace back to a source. UPG is fine and dandy for you when it is your UPG. But we’re coming up against things not based in the lore that have been passed around as unquestionable truth for nearing two decades now which we cannot trace back to a source. Many of these things may have been UPG, but when they lost that personal connection and were passed off as gospel they lost all real value. The problem is that people have had this “Valknut” idea beat over their heads from day one continuing for decades and it is baseless. We need to get away from that and we need to reevaluate these things more instead of just accepting that they’re true just because so-and-so told so-and-so from a twenty year old source.

[1] http://www.sunnyway.com/runes/tattoos.html (This image shows an all too common idea we need to reexamine).

2 thoughts on “⌘ This is a Valknut”